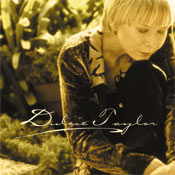 McLean singer-songwriter Dulcie Taylor had been winning over coffeehouse and club crowds before attracting critical acclaim and getting radio play for her new pop album “Diamond and Glass,” released in June. But she insists she didn’t do anything differently when she recorded the CD. ” I do what I do. . . ,”

Taylor said. ” So why would I change? Hopefully the only change will be getting better.”

The album features wonderful lyrics. . . and in addition to writing and singing, she plays the guitar, dulcimer and harmonica. Taylor knew the album was special when she was recording it. ” I’ve listened to a lot of music and with the players that were on it, I knew it was good,” she said. “But this is such a hard business, you can have a great product that doesn’t do well and have bad stuff that does. It’s a strange business, we all know that.” ” You can tell it’s good when you get your family turned on and it’s not like ‘Oh, we’re your family,'” she said. Taylor, a South Carolina native who moved to Los Angeles before settling in Northern Virginia, has been doing a tour of radio stations up and down the East Coast.
” It’s exciting,” she said.