Atascadero’s Taylor talks frankly about love, loss and longing in her new album.

by Hayley Thomas
The Atascadero News 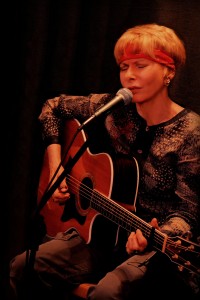 Atascadero singer songwriter Dulcie Taylor experienced an epiphany at athe Paso Robles DMV a few years back. In 2012, she moved from Washington, D.C. to Atascadero, and was delighted to find that the smiling faces around her are for real. “I’m used to the DMV not being a fun experience,” Taylor said. “The lady at the counter was there joking with my husband and myself, we were all laughing. the people here on the Central Coast are just so nice, even the DMV is a nice experience.” Taylor’s newest CD, “Only Worn One Time,” was released on the Mesa / Bluemoon Recordings label earlier this month, and a slew of local shows are planned for the rest of the summer.

Taylor said she enjoys playing for folks on the Central Coast. “People are here because they want to be here, and there is a lot of openness in the lifestyle,” Taylor said. “I love going to see other people play as well. Everyone has been so supportive here, and we have a lot of great players. They aren’t just good for being in this area. They are good for anywhere.” The native South Carolinian recorded the album at Atascadero-based studio the Colorado Room. George Nauful and Tyson Leonard produced the record. Tracks were mixed by Keith Olsen.

Her last CD, “Free of this Sorrow,” was released in 2012 and reached No. 1 on Amazon.com as· the Top-Rated Americana album. Dulcie was also awarded First Place Best Songwriter at the 2013 New Times Music Awards for her song,”Cigarette Smoke.”

The title of Taylor’s newest work refers to losing her sister too soon. ‘The title track of the new CD, ‘Only Worn One Time,’ started out as a song about my sisters wedding dress,” Taylor said. “We lost her when she was quite young, and I just couldn’t bear to part with her wedding dress. I carried it from house to house for several years. Then, one day I realized someone else could really use this beautiful dress and wouldn’t that be a lovely thing to do with it.”

The song “Like My Momma Loved Me” talks about Taylor’s adopted friends sand the emotions surrounding child and parent.

“Nowadays, people seek out their birth parents so much more than they did in days past, and folks who gave up babies for adoption seek out those children, so I wrote a song from the viewpoint of the birth mother who finds her daughter,” Taylor said. “I can only imagine what it must be like to see the grown child when you had given it up when it was a baby. It must be such a strong combination of regret for the lost time, joy for finding the child and hopes for the future.”

“On A Rainy Day” is a simple, upbeat tune celebrating the wonder of love falling from the clear blue sky. Taylor said her newest album is introspective, but not wallowing. The musician said she wants to bare her soul but also entertain audiences. There is a balance of light and dark that shines in the rootsy, soulful vibe of her music.

“I believe in the light at the end of the tunnel,” Taylor said. “I already know how bad things are, I don’t need to be inundated by it… I believe life is made up mostly of small things. If can’t find happiness in that, you aren’t going to find much of any.”

For more information on the artist, or to view Taylor’s full central coast Summer show schedule, visit www.dulcietaylor.com or www.mesabluemoon.com